Raise the Rates thanks the people across BC who took the Challenge, living for a week on only the food they could purchase with $26 dollars. This is the money a single able-bodied person on welfare has for food – every week. 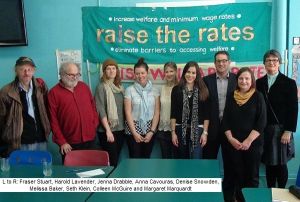 People of all ages took the Challenge across the province, on Vancouver Island, in Prince George the Kootenays and greater Vancouver. Some have blogged and put their bios here. Others have quietly taken the Challenge with no publicity talking to family and friends. Thanks to all of you.

The people who took the Challenge were all hungry, many lost weight, suffered from a lack of nutrients, felt tired, stressed and irritable, and not as able to focus as usual. All of this after just one week of eating a welfare diet. Imagine the long-term impacts of this diet on people.

A group of dietitians and nutritionists took the Challenge and, in spite of all their training and skills, none of them managed to work out a healthy and filling diet. It is impossible to stay healthy on welfare.

As well as the physical problems of eating a welfare diet, there were social impacts. Food, which is so important to human relations and culture ceased to be a pleasure. The Challenge takers thought about food most of the time, but even when they ate it was not a joy. Their social life suffered as they didn’t meet people for a coffee or share food. Poverty can increase social isolation, which is detrimental to mental health and finding a job.

Keeping people in welfare in such poverty actually makes it harder for them to get a job. They spend a lot of time just to get food, and are not in the best of emotional and mental states. Think of the impossible choice for someone who has a job interview near the end of the welfare month when money is run out. Do they try to get some food to eat or get a haircut before the interview?

People on disability get a bit more money but have higher expenses as they have a disability. For many on disability this is the income for their life. They face a grim future of constant poverty.

There is a moral saying, “Do unto others as you would have them do unto you”. Clearly BC’s politicians do not follow this advice, as none of them were willing to live on the welfare diet even for one week. Yet they do make the 180,000 people on welfare live in poverty.

This site has information about the challenge, bios of some who took the challenge, links to their blogs, blogs on this site and some media coverage.

Above all please take action to help end the poverty of welfare. 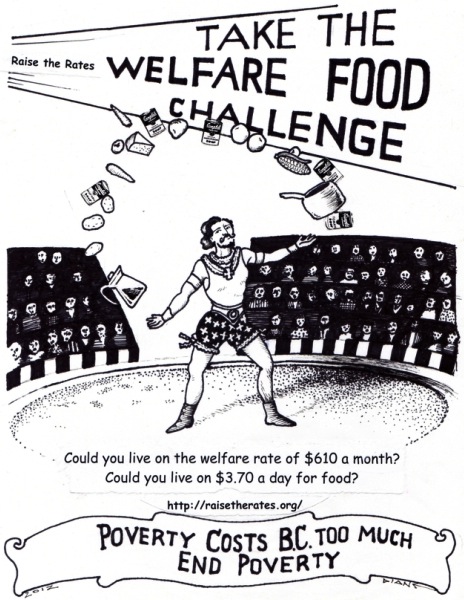